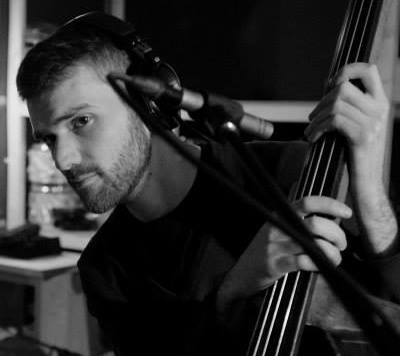 Sam began playing the double bass aged 16, taking classical lessons and teaching himself jazz. Whilst studying both disciplines at Trinity College of Music with Corin Long and Steve Watts respectively, he began to perform professionally on the British jazz scene. Since graduating seven years ago, Sam has appeared regularly at many established jazz venues in London and around the UK, as well as embarking on numerous international tours throughout Europe, America, Canada and Brazil.

Sam is a member of Jeff Williams' UK-based quartet, award-winning saxophonist Julian Arguelles' quartet, vocalist Emilia Martensson's band, and Andrew McCormack's UK trio. As a sideman he has performed with Ethan Iverson, John O'Gallagher, Stan Sulzmann, Martin Speake, Nikki Iles, Bobby Wellins, and Jim Hart among many others. He is also proud to be involved in a number of exciting projects with his contemporaries, including the George Crowley Quintet and the Michael Chillingworth Sextet.

Download a zip file containing an up to date biography and hi-res photos suitable for print.